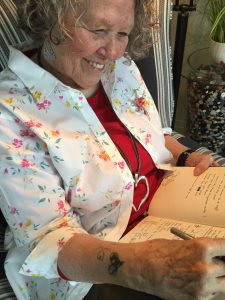 It happened over the weekend. I was writing about ageism when I came across a headline in the Globe and Mail: “A tattoo for turning 80? Was Mom a little too independent?”

Why would the writer — an apparently otherwise smart guy, who would likely oppose other forms of racism or prejudices about social class — indulge in ageism?

The story was intended as a tribute from a loving son to his competent, adventurous and independent mother. But the everyday ageism expressed in the story struck me as sad and unintentionally cruel.

Because while the tattoo may be unusual, it’s not a sign of dementia, and the inked 80-year-old retired civil servant in the story is far from alone.

She lives independently, with some of the benefits of a long career: she travels alone, enjoys interests in arts/culture/faith/friendships and is well-connected to an extended and loving family. And while the son describes his mother using stereotypical inferences that describe “many grandmothers,” looking “short, plump and white-haired… rosy-cheeked and jolly,” she actually sounds less like Mrs. Santa Claus and more like many older Canadians: healthy, happy and independent well into our 80s and living in our own homes or apartments.

But the benevolent stereotypes about mom and the unnecessary paternalism disguised as “helpfulness” perpetuate ageism, and they hurt.

Respect all adults’ choices, including older ones

Older Canadians who choose a tattoo or online dating or retirement in Belize also have decades of hard-earned wisdom. Bucket-list choices that you might not like are not reasons to assume that your loved one is making irresponsible decisions.

Older people should resist ageism — even the compassionate kind. We need to speak out and question these negative stereotypes, and kick some ass if need be, for the good of our health.

Those of us who value and affirm our own meaningful contributions to society can avoid internalizing the lame stereotypes. Because on the flip side of politely accepting the Mrs. Claus role, research shows that older adults with negative attitudes about aging may live 7.5 years less than those with positive attitudes.

Ageism is bad for your health

When seniors face age-based discrimination and start believing harmful stereotypes, they are more likely to experience stress and depression and are at higher risk for chronic illnesses — all factors that increase the impact of covid infections.

Everyday, compassionate ageism doesn’t just feel bad, it’s bad for our health. And it can lead to terrible public policy. Ageist comments and attitudes enable elder abuse, workplace and employment discrimination, unaffordable housing, insufficient home care and reduced access to public transportation — all of which existed prior to the pandemic but worsened over 2020.

According to writer Ashton Applewhite, if we diminish our regard for the senior members of our society verbally, we are likely to do the same when it comes to the way we frame policy: removing older adults’ dignity and sense of agency in condescending generalizations that assume vulnerability and dependence instead of resilience and independence.

Arguably the most prominent anti-ageism activist today, Applewhite is the author of This Chair Rocks: A Manifesto Against Ageism. Her TED talk on the subject has been viewed more than 1.3 million times.

Unlike other prejudices such as racism and sexism, which are manifestations of fear of the Other, ageism is unique in that it targets our future selves. When headlines about elder neglect, mistreatment or abuse appear in the media with increasing frequency, our inner alarm bells ring and we wonder what will be different by the time it’s our turn.

Applewhite is encouraged by increased interest in initiatives such as intergenerational housing and friendship networks in the UK, Europe and the US. She is optimistic “because younger people have grown up in a more mixed world and they know diversity is here to stay and that this is a good thing. It’s a much smaller ask for them to include age in the quest for social justice for all. And the #MeToo movement has also helped. It’s been a catalyst for universal equality. In that sense, activism feeds activism”.

There is, however, one massively important, although impossible to quantify, counterbalance to the prospect of growing intergenerational tension: love.

Michael Nicin, executive director of Ryerson University’s National Institute on Ageing, points out that children want their parents to live long and healthy lives. And parents are anxious not to be a burden to their children.

“We are all worried about each other,” Mr. Nicin says. “We all care for each other.” He expects to see an increase in intergenerational housing over the years, as children, parents and grandparents lean on one another for support. “The more we depend on each other, and not on the state, the better off we are,” he believes.

For as long as we can foresee, there will be more older and fewer younger people among us every year. If we are to live well, we must care for one another, however old we are and whatever we may need.

As I finished submitting my comments to the Globe and Mail article, my spirits lifted. On the front page were photos of US Speaker of the House Nancy Pelosi, standing in full fury at the podium, denouncing the domestic terrorism that had reigned down on the Capitol Jan. 6th. Like her late colleague Ruth Bader Ginsburg, Pelosi’s lifetime of leadership gave her the gravitas to lead the charge against the infamous bully, Donald Trump.

As Madame Speaker’s daughter says of her 80-year-old mom, “she will cut your head off and you won’t even know you’re bleeding.” 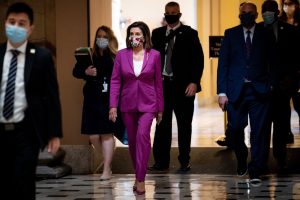